Dear Psychos, I’ve been learning piano for the first time. Six weeks ago, I couldn’t read music, and I had no idea what keys played which notes. Of course, I’m in the thick of stumbling around, trying to wrap my brain around junk like the fact that some idiot decided that A flat and B sharp ARE THE SAME GODDAMN THING. Also, no one informed me that I’d need to learn Italian in order to play this instrument. Not unless this outfit comes with bottomless thin crust pizza and gelato. No grazie.

I’ve often been asked if I play piano (or told that I should) because my fingers are so long and amazingly graceful. Well now, all you well-intentioned judgy people can rest easy, because my fingers are fulfilling their prophesized (spellcheck doesn’t like this work and says it’s not, in fact, a word, but I disrespectfully disagree) glorious destiny. However, in my limited exposure to musical pieces, I’ve come across some that require my pinky to be on one note (like a C) and then for my thumb of the same hand to be on yet another C an octive higher and jesus handcramps that’s hard and my tender digits just can’t reach! I’m honestly not sure how I’m supposed to figure this one out.

In short bursts, learning to play an instrument whose sound I consider to be heaven on earth is exhilarating. The first few weeks of class, we were instructed to practice the pieces we were given, and I did, but I couldn’t contain my excitement and almost immediately started looking up music tutorials on YouTube. Finding it kinda by accident, I came across the theme to Harry Potter and just couldn’t help myself. It took me maybe an hour of practice to be able to do the first few measures with little to no mistakes, and as soon as I produced those first eight magical notes (if you’re fans you know exactly what I’m talking about) I got this rush of giddy excitement. ACTUAL MUSIC WAS FLOWING THROUGH ME! Music by John Williams, no less! I learned the first minute of the song and practiced it so much that I have it memorized and didn’t even need to consult my sheet music. What excited me the most was when I found myself starting to sway as I played – the piece has such a whimsical quality and I found myself playing around with speed and intensity. After a while, the piece felt so natural. My fingers knew their places – muscle memory was successfully taking place. Insert mind-blown emoji.

After seven years of being out of the workforce and being a stay at home mom, getting to challenge my brain in a way it’s never been challenged before is both exhausting and exciting. I’ve been having dreams of playing the piano – ever more complex pieces. I’ve found myself keying (musical pun intended) into background piano music in commercials or movies, wondering what key that was in or if I could play it if I tried. I can also feel a difference in my hands. They are literally stronger, more dexterous. My fingers are more nimble and responsive. It’s like they’ve woken up from a deep sleep. I feel like my hands are finally doing what they’ve been meant to do all along. I remember feeling the same way about my boobs when I started breastfeeding my babies.

I find myself frustrated that I can’t magically play complicated pieces immediately. My left hand can’t switch chords fast enough and forget trying to make my two hands play two different things at the same time. But progress is being made, however slowly, many swear words at a time.

My ultimate dream is to be able to play Lady Gaga and sing at the same time. I’m well on my way.

I want my kids to remember the little things.

I want my kids to remember that I carried a junky old towel to the park after it rained and I’d wipe down all three slides so they could play and not get their cute little butts soaking wet.

I want them to remember how, when they were each 2-3 years old, I’d lay out their clothes exactly how they’d go on their cute little bodies: pants front-side-up and shirts front-side-down.

I want them to remember how I’d set out a morning snack the night before weekend mornings, so they could munch on cereal and raisins while their daddy and I got to sleep in as long as we could.

I want my kids to remember how when I got home from the library I’d casually display new books on the coffee table and walk away, knowing they’d dive into them in their own time.

I want my daughter to remember me going through her preschool flashcards with her, and celebrating her learning victories with high fives and giggles.

I want my son to remember how I taught him to use a paintbrush, with soft brushstrokes that feel like feathers on the skin.

In reality, they may not remember any of these things. That’s okay, because I will.

Mostly, I just want them to remember feeling loved.

Today was a great day!

Today I got to cross an item off my bucket list!!!! Exclamation point!

Today, I took an oil painting class in the style of Bob Ross and I FREAKING ROCKED IT.

I’ve had training in the art of drawing, pen/ink, watercolors, and acrylics, and I’ve always wanted to try oils. I love the impressionist style of painting and I’ve admired how thick and gloopy and tactile oils are when layered and beautifully globbed onto the canvas. I’ve gawked at real Van Goghs and seen just how three dimensional his paintings are. They literally jump out from the canvas!

I even bought my own set years ago, but never opened it because I wasn’t sure I’d know what to do with them. New things are hard to start.

So, this Fall I finally signed up for a one day class through Parks and Rec and it was SO. FUN!

I figured I’d be the youngest in this class by at least a decade, but I was pleasantly surprised. With six in the class, two were older, two were about my age, and one was a high school student. And one other student, like me, had never worked with oils.

The pre-chosen Bob Ross painting was this one: 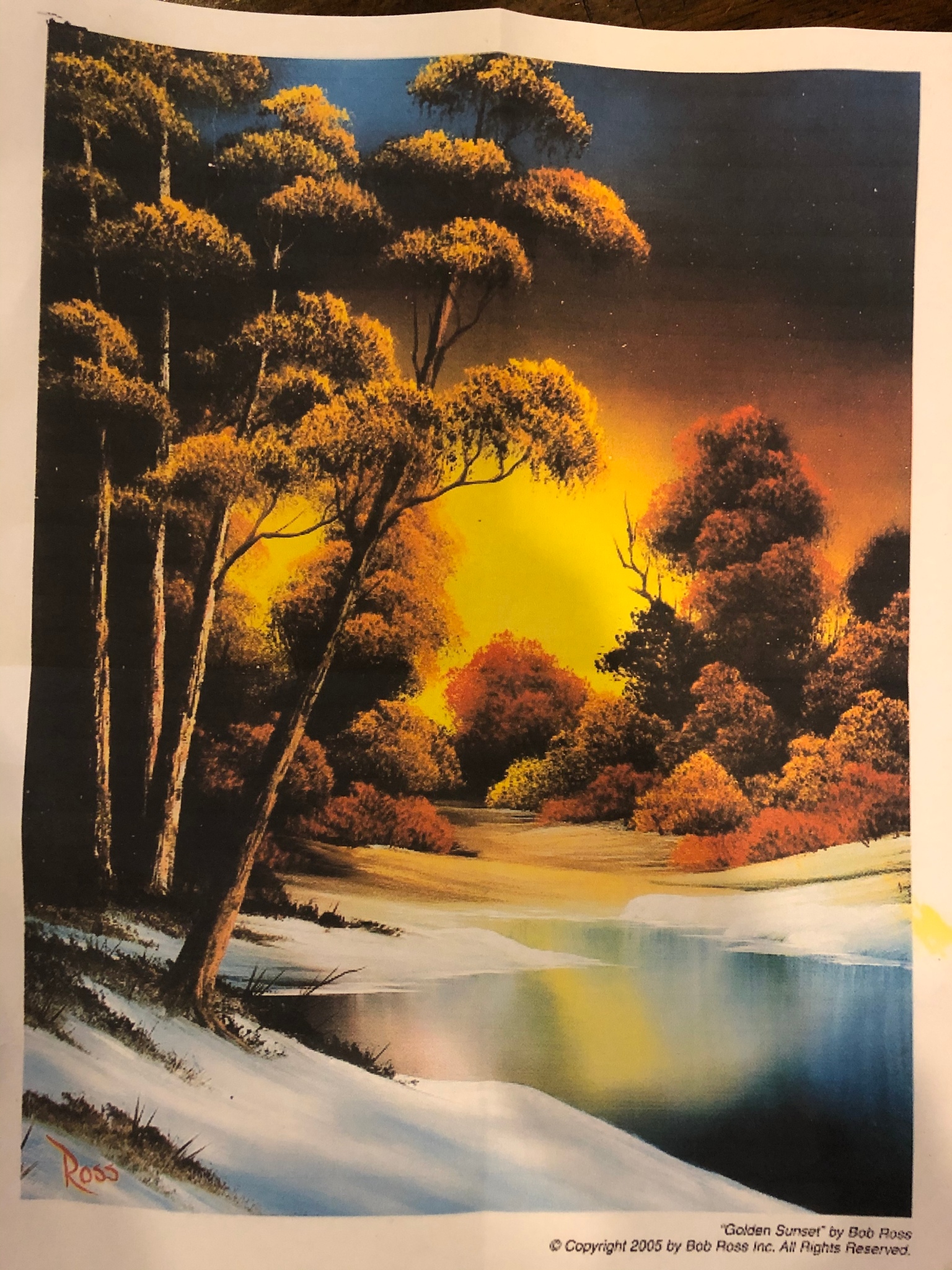 We started with a black canvas (yes, BLACK, not just blank), which I thought was cool. I’d never done that before. Not having any idea how these paints behave was nerve-wracking! 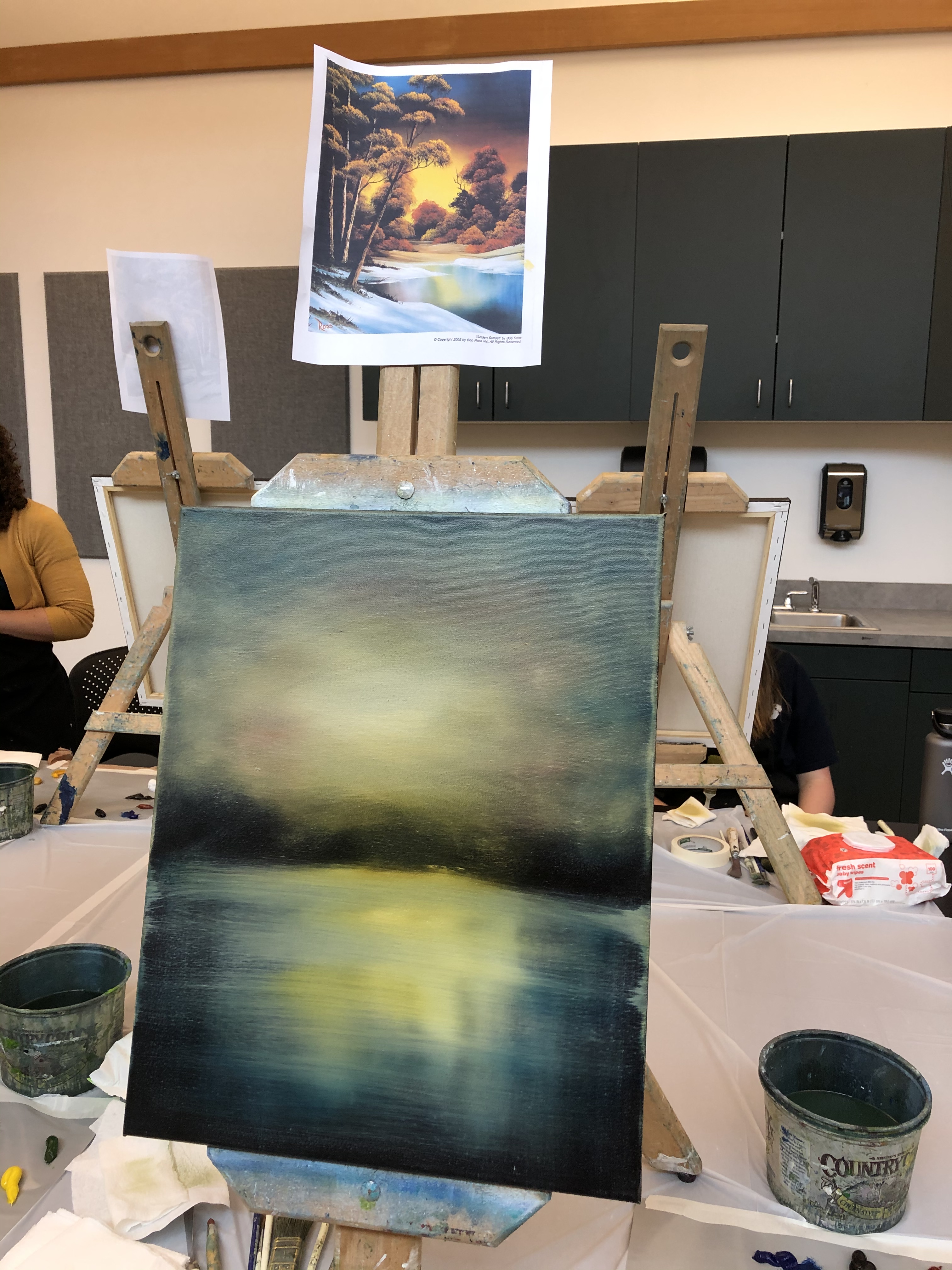 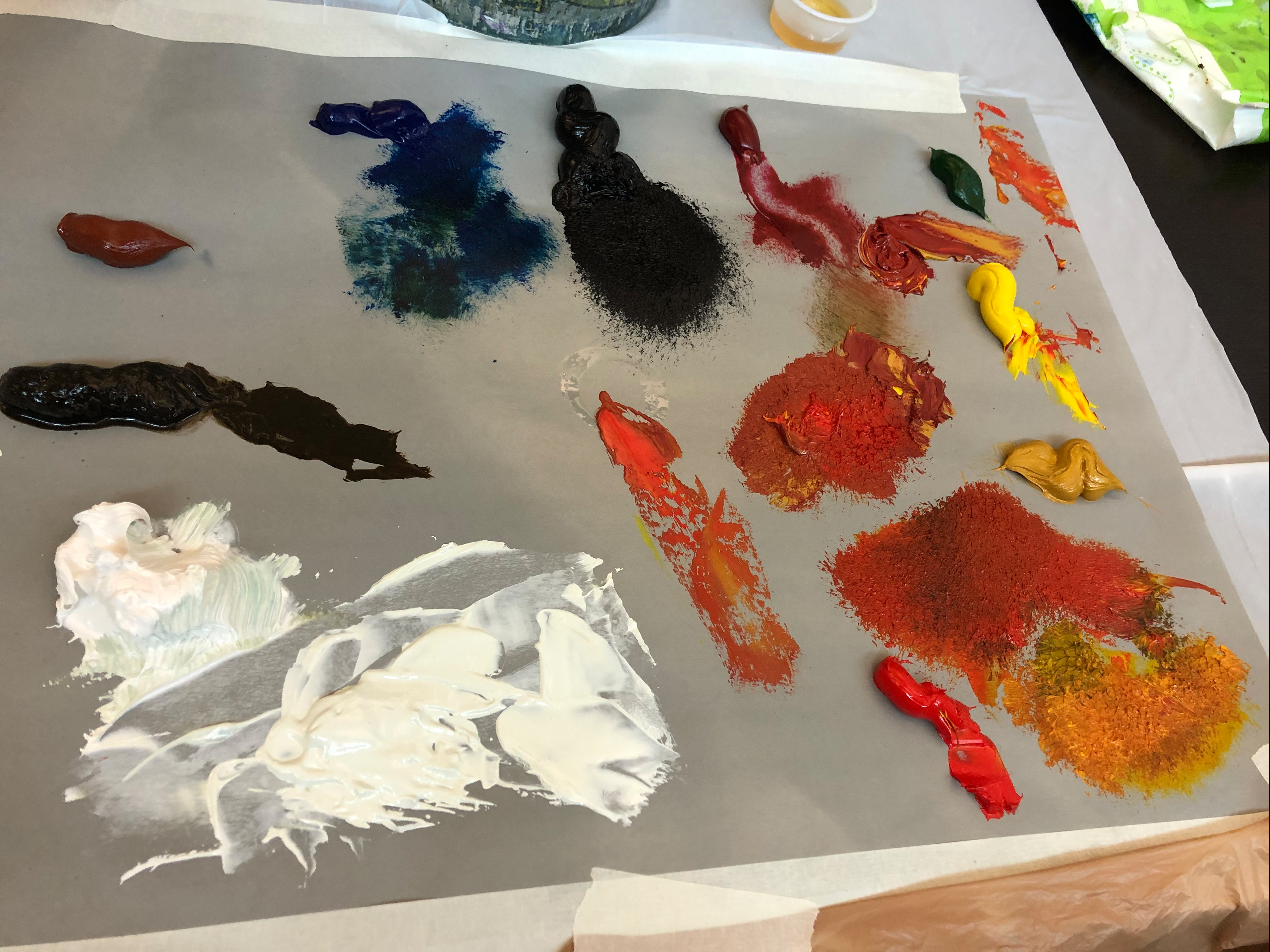 My favorite part was mastering the art of the Happy Tree!! 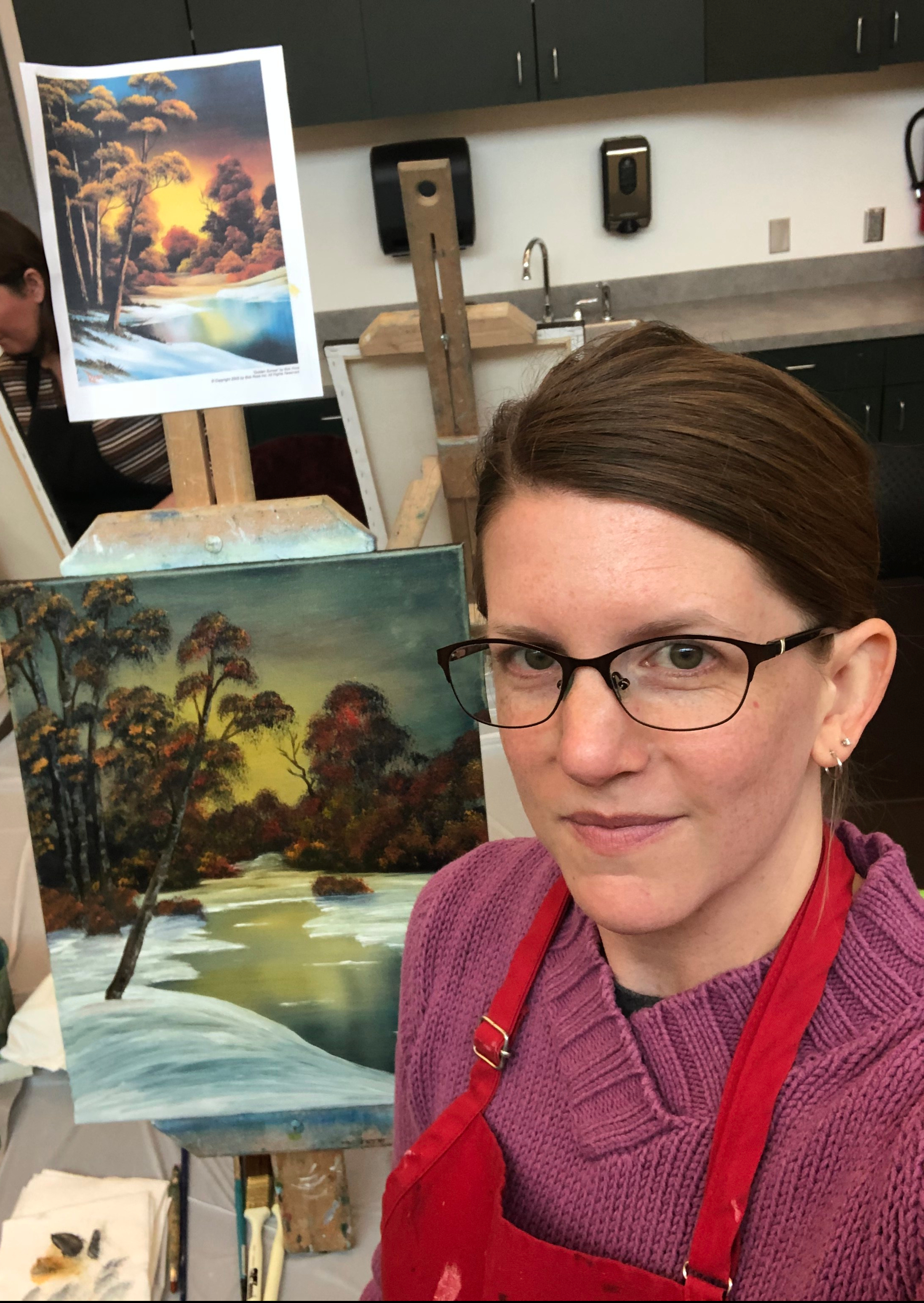 I’d say the biggest downside was all them toxic fumes, which made me lightheaded after a while. Other than that, sign me up! I’m hooked! 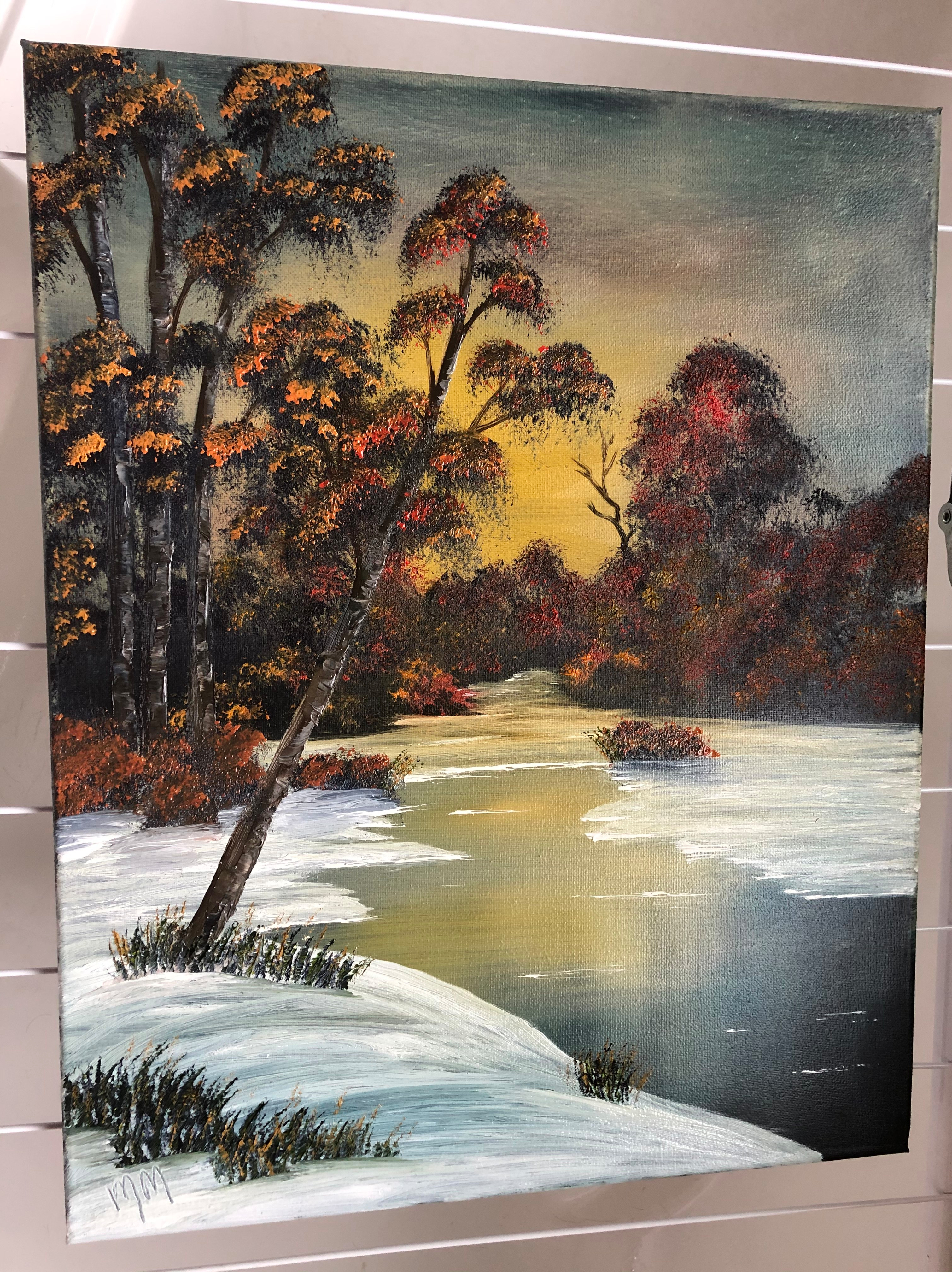 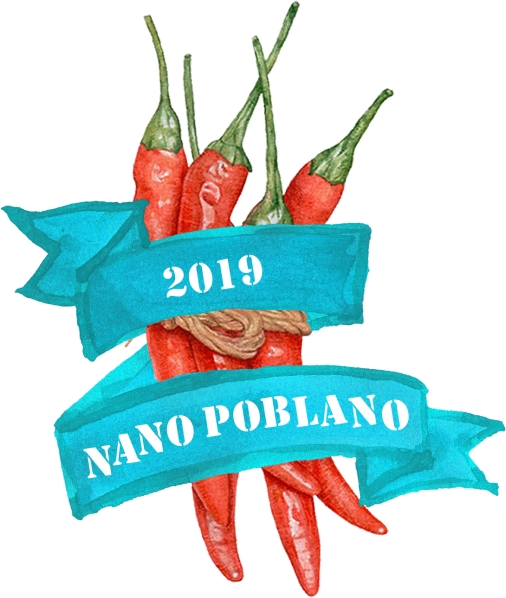 Check out all the fun: https://cheerpeppers.wordpress.com/

To an untrained ear, you might think that my toddler was addressing me using a sweet accent he picked up from overhearing Downton Abbey.

Now that I think about it, that would be pretty sweet.  But what he’s referring to is something even sweeter in my opinion. 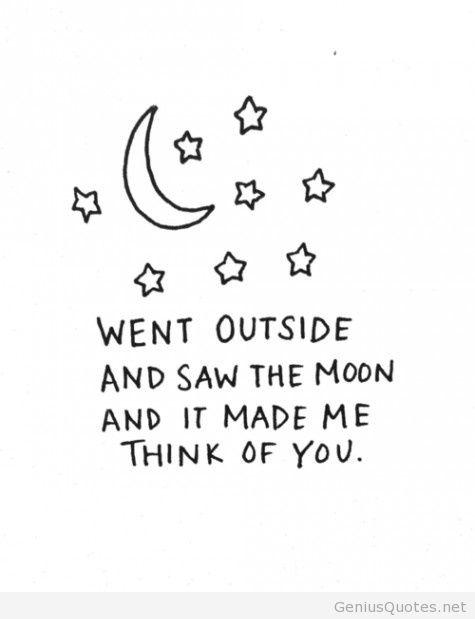 Lately, my kid has become obsessed with everything moon-like, which developed quite randomly and unexpectedly.  My husband and I, before we were parents, used to think it was weird and quirky when we saw kids being obsessed with seemingly random objects.  Of course, we now realize that, with toddlers, random is the norm.  Case in point – I once babysat for a sweet 4 year old boy.  On one of our first meetings, I asked him to go get his favorite book and we’d read together.  He brought out a ceiling fan catalog.  I glanced at his mom, who happened to still be in the room, and she smiled and nodded.  Unsure of how to read this book, I asked the kid to read to me and he proceeded to point out particular fans and explained to me exactly why they were his favorite.  Yuup.

My son’s obsession with moons began innocently enough through reading his growing collection of books.  I never realized how many kid books have moons in them or reference moons – there are a lot.  There’s Goodnight Moon, for starters, and on the very first page of The Very Hungry Caterpillar there is a large moon.  We started pointing these out, among other objects in the pictures, to Dylan when we read to him every night.  And then one night, he started saying it back to us.  He’d point at the yellow crescent and coo, Mumm!

I remember the first time Dylan pointed and named the real moon.  We were coming out of the library and it was just starting to get dark.  The lights in the parking lot had come on already, and since my kid loves lights, I figured he was pointing to a light, thinking it was the moon.  But nope, he knew the difference and he had also made the connection between the yellow crescents on paper with the glowing crescent in the sky.  What an amazing moment.

Since then, he works hard to seek out the moon wherever he can.  If he spots a yellow circle, it’s the moon.  Even pictures of the sun are, in fact, the moon. (Duh, mama!)  He’ll sit in his room and page through books he knows have moon pictures in them just to point them out to us (or to confirm they are still there).

More recently still, Dylan has started searching the sky looking for the moon.  He asks us to take him outside or to a window so he can see it.  (Points to window/door and shouts MUMMM!)  If it’s the wrong time of day, or if it’s overcast (welcome to the pacific northwest, moonlovers!), we explain to him that we can’t see it right now, and he gets so very frustrated and upset.

All of this is incredibly exciting for me to watch.  First, it’s evidence that my son is learning, growing, and showing preferences and making connections.  How freaking cool is that?!  Second, I love astronomy and space travel and…the moon.  When I took the PSATs, they had you list your projected career choice.  As a Junior in high school, I chose astronomer (this was while I was still in denial about my abilities in physics and quantum mechanics).  I can quote Apollo 13 in its entirety.  The Air and Space Museum is one of my all-time favorites.  I just watched a documentary about Scott Kelly’s historic year spent on the space station.  One of my favorite movies – Contact – speaks to me on so many levels.  I even insisted we visit Arecibo while Brian and I were in Puerto Rico a few years ago.  It was my nerdy pilgrimage of joy! 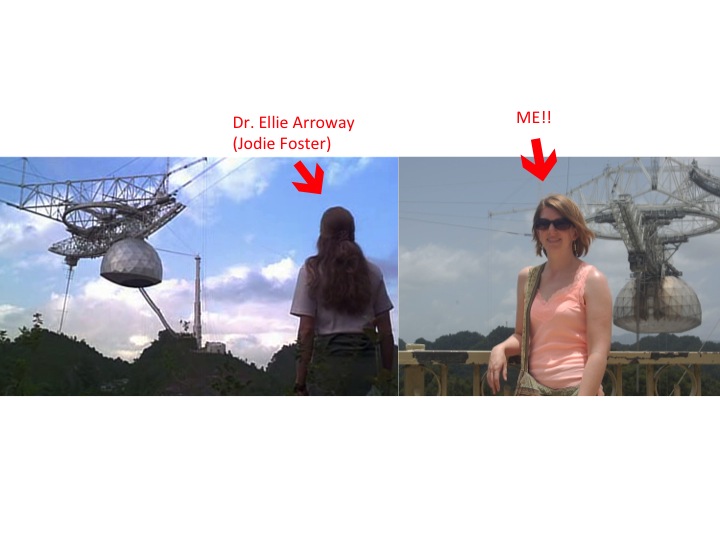 So anyways, I am so excited to be able to share my love of space science with my son!  I told Brian that it’s only a matter of time until we have to get Dylan a telescope.  (And by Dylan, I mean me, because I was the kid who asked for a telescope and instead got a pair of high-powered binoculars.  So much for getting to be Ellie Arroway.)  I can’t wait to explain to Dylan why the moon is always in a new place in the sky and why it looks like it keeps changing shape.  And why we have seasons and about retrograde planetary motion and red shift and blue shift!!  So far, we’ve introduced Dylan to Neil DeGrasse Tyson’s reboot of Cosmos (which is a really cool program, I might add).  And while Dylan largely ignores it to play with his toys, he always comes back to pictures of the moon.