Today, I am reposting this older post because not enough has changed.

When I originally wrote this post, I had one baby boy. Now I have two kids in school and shit is getting real. As a mom and citizen, I am getting increasingly scared, angry, and frustrated.
Let’s place human life above politics and money, research the hell out of the American gun violence phenomenon, and then implement evidence-based practices to prevent it.
Moving forward, no politician gets my vote unless she/he has a comprehensive gun violence prevention plan.
No more excuses.

The shooting in Roseburg, OR last week motivated me to write letters to my representatives encouraging them to pass sensible gun control laws.

I’m listing the Oregon reps (and their contact info) to whom I wrote, and below that I will include the basic letter that I wrote and adapted for each representative.

It’s not okay to take my writing from this site without my permission, but today, everyone has my permission for this post.  Please- take my letter and use it!  Write to your representatives and adapt my letter to make it say how you feel.  Make your voice be heard!

I’m sick and tired and frustrated, but I am also realistic.  I know there’s a good chance that all these reps will ignore my letter.  That is what it is.  But at least I did something.

Today, I did something.

What will you do?

As all of my loyal readers know from my post about glorious, luscious body hair, Brian bought a gun that he picked up this weekend for his birthday (Happy Birthday Brian!) and couldn’t wait to try it out.

(For the record, I don’t approve of owning guns, and so our compromise was that his gun lives at his parents’ house and gets to haunt their lives with its danger and mystery.)

Brian got a CZ 455 FS .22LR (…which is a fancy way of saying he got a rifle, y’all). As part of my birthday present to him, I decided to get him a poster of something he really hated so he could use it for target practice. At first, I thought about painting him a large picture of a gruesome zombie like in The Walking Dead, but I didn’t have enough time or resources, and I would have had to paint it all in one go since there is no place to hide a painting-in-progress in this tiny apartment. So that was a no-go. Next, I thought about a poster of Michael Bay, or maybe Jerry Bruckheimer. Nah, too creepy. Ooh, and then I had it – the movie Brian hates above all other movies for its lack of historical correctness involving war and planes – Pearl Harbor. If you haven’t heard it, please pause this blog reading to take a listen to this song (Ok, so the video is of some random dude who made it for his girlfriend, but it was the only full version of the song I could find on short notice. Plus, it’s sweet and funny. Just like jelly beans up the nose.) That song pretty much somes up Brian’s thoughts on the matter. It was settled; a Pearl Harbor poster that he could shoot up was the answer. Funny thing was, I couldn’t even bring myself to spend twenty bucks plus shipping to get a poster of such a shitty movie, so I printed out a picture of the movie poster for free. I figured this way, the 8.5×11 picture would be way more challenging for Brian than a large, fancy real movie poster. That, and I am a total cheapskate.

Needless to say, Brian loved the shooting target and showered me with kisses. He placed an orange dot on Ben Affleck’s forehead posthaste.

On Easter Sunday I was invited to Brian’s parents’ house for a delicious meal. The weather was amazing, and so I acquiesced to giving it the good old American redneck try by shooting in the general direction of some cans, plastic bottles, and Ben Affleck’s forehead in Brian’s backyard.

Now, I had actually shot a .22 when I was teenager at this family Boyscout camp, but for that we got to sit down and the guns rested on tables. (I preferred the archery range, where I actually got a bullseye, Katniss style) With Brian in his backyard, it was quite the task for my wimpy arms to hold up a very dense piece of wood and metal and try to keep it still while maintaining a regular heartrate and breathing rhythm.

But you know what?

Turns out I’m a pretty badass shot. That’s right, you heard me. 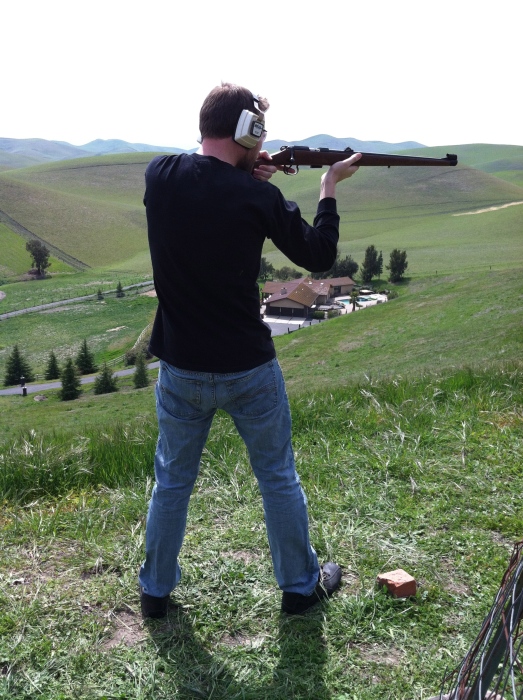 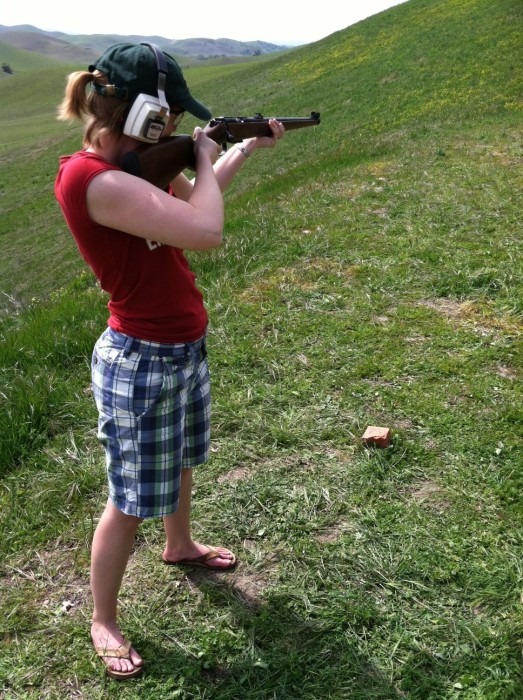 He didn't need his ear anyway.

UPDATE: And as it turns out, I forgot to mention that I am nearsighted, and I was shooting at targets 75 feet away – without my glasses. It was like I was the masked Dread Pirate Roberts sword fighting Inigo Montoya! I am not left handed. Inconceivable!

All my enemies (including that kid in 2nd grade who puked on my shoes in the lunch line) had better watch out.

The Beatles weren’t kidding, you guys.