So my application to sit for my licensing exams was approved!  Huzzah!

Too bad I couldn’t have found this out a month ago when the licensing board actually sent out my approval letter…to the wrong address.  Sigh.  And trust me, this was their mistake, not mine.  Not that I am keeping score.  Except that I am.

Now I have a date set for me to take my first exam, and I ain’t tellin’ no one when that date is juuuust in case I fail and then have to go through what I like to call The Clueless Effect. 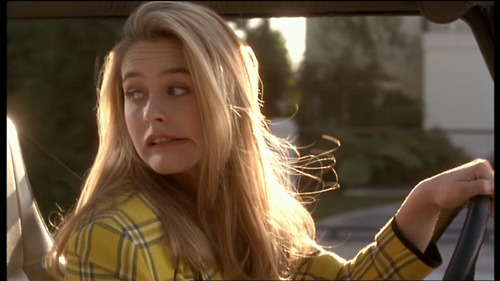 Rewind back to the year 1995.  O.J. Simpson was found not guilty, I was 12, and Alicia Silverstone hadn’t regurgitated vegan food into her yet-to-be-born child, but she had made the movie Clueless.

In this amazing coming-of-age film, loosely based on Jane Austen’s Emma, Alicia Silverstone played Cher, a girl who knows what it’s like to have people be jealous of her, me included (did you SEE her closet?!).  Cher turned 16 and took her driver’s test.  Of course everyone knew, and so it sucked when she got back home to find her makeover-doll-turned-best-friend flirting it up with her ex-step brother crush and she had to tell them she failed.

At the tender age of 12, I felt for Cher.  You try driving in platforms!  I screamed right along with her.  But I didn’t yet know exactly how shitty it felt to have to tell friends and family that I failed at something…until I turned 16.  I failed my first driver’s test, and that failure tasted like spoiled milk with black pepper.  And shame.  Bitter, bitter shame.  One of my classmates sincerely stroked my bruised ego: Wow, you’ve never failed anything before!  Humility burns like stomach acid. 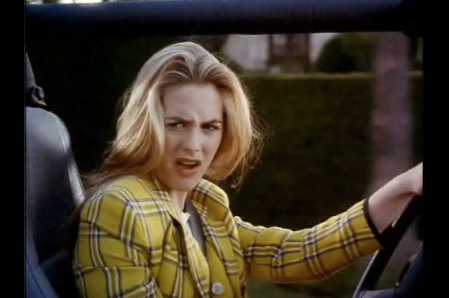 I’ve learned a lot from Cher and from my own experience.  First, never waste time practicing to park.  Everwhere you go has valet.  Second, searching for a boy in high school is as useless as searching for meaning in a Pauly Shore movie.  Third, don’t ever tell people when you’re gonna take a huge, important pass/fail test.

I don’t plan to fail, but in the slim chance that I do, I don’t wanna talk about it.  As if.

So let’s just say that I am taking this 4 hour doozy of a test quite soon, I am freaking out, and I’ll let y’all know when I pass.  I’ll throw a party and I hope Marky Mark is there.

Send some dope vibes my way!